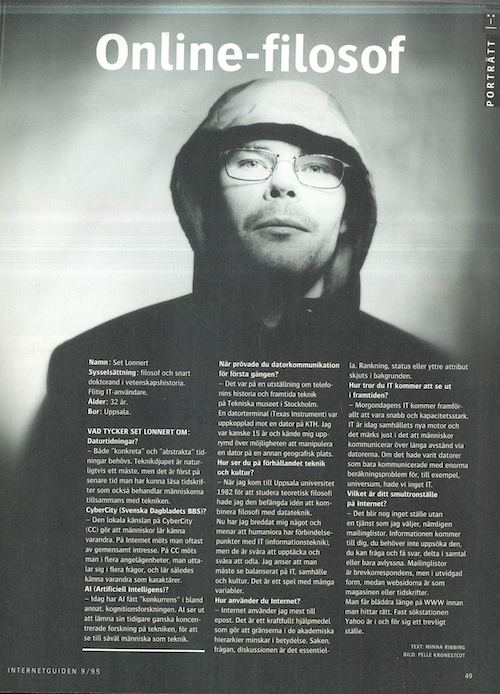 Interview from Internetguiden no. 9 1995. I already had a homepage when the net was young in 1995, when there were only 23 500 unique sites. Yes I was on a shared domain, but still the world was small. Remember that Google first started in 1998 when the size increased to 2 410 067. In 1995 Altavista and Yahoo was as close as you could get to finding out where things were back then. [Source]

In 2022 the company “Set Lonnert Humanistics & Technology” celebrated its 25th birthday. During the years I have been involved with writing articles, a little pamphlet early on programming in Java, educated people in programming, worked as a freelance computer journalist, discussed thoughts on computers and future technology, much much programming during the 90ties, etc.

During these years I have tried to combine my interests in the humanities and technology in every wide sense of these concepts.

I would like to bring you a better understanding of computing in general, and to specific areas of interest. I have a background in what maybe apprehended as the outdated analytical philosophy; often appreciated as replaced by science proper. But precisely the analytical could play an important role in clarity and simplicity of concepts used in this field. My experience with computers since the late 70’ties, and a combination with academical humanistics gives another perspective on the current and future connections to society, that usually is underlined within the business. I hope.